I was married before Tinder came out, which is fine, but Tinder produced my Favorite Internet Thing in 2015 with this: 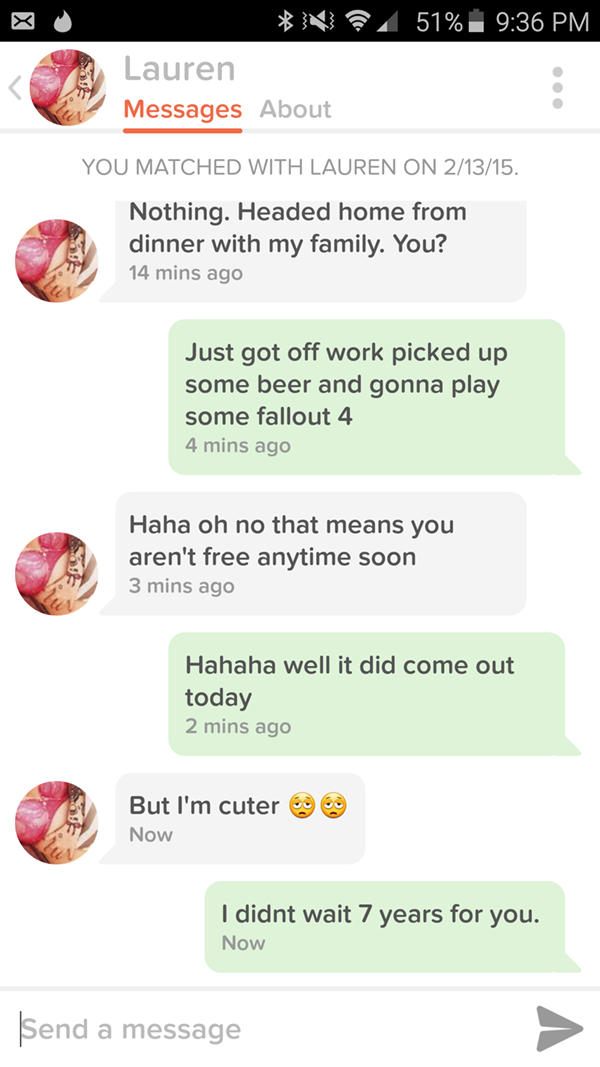 I can’t say I was waiting with bated breath – while I had dumped a lot of hours into Fallout 3, I took a pass on New Vegas and have never ventured into the world of Skyrim, partly because of the same thing that happened to me when I fired up Fallout 4: Oh, my god, this world is huge. I’m never going to get everything done! And for the first several hours, that’s how I felt. I appreciated the improved gunplay, loved how they changed V.A.T.S., and thought for such a gigantic game, it was pretty darned good looking.

And then it happened.

I found the first set of power armor and mini-gun and a deathclaw came tearing around the corner, charging towards me and I unloaded on it, killing it and watching it slide face first on the asphalt to come to rest at my feet. I am the Vault Dweller and the wasteland of the Commonwealth is my playground. Thank for recess, Fallout 4.

Justin Lacey - "The loot fucking matters. I've never been so terrified in my life. It's like Bethesda wanted to find a way to quadruple the time I wanted to spend in its world. It's all worth it though because I can make a gun that will terrify you and barely scratch your skin, or I can make a rickety, one handed piece of shit that will literally make your head explode. What was I doing again?"

Aaron McNeal - "I finally played Fallout 4 again after over a month of other games. So worth it. I got locked into a battle with what I best described as an unfair legendary Mr. Gutsy with some minigun style armament. I defeated it on the second try, stopped to loot it, and a few seconds after the scuffle had ended, a car I was too close to exploded and I screamed with the fury of a thousand mole rats on the day the bombs fell."

Stay tuned for more Games of 2015 this month as we build towards The 2015 Grimmys - Horrible Night's Games of the Year Awards.