Whether it is just conveying a sense of speed or taking on the complexities of time travel, manipulating time has made and broken a lot of games over the years.

What games have handled the manipulation of time in a memorable way? 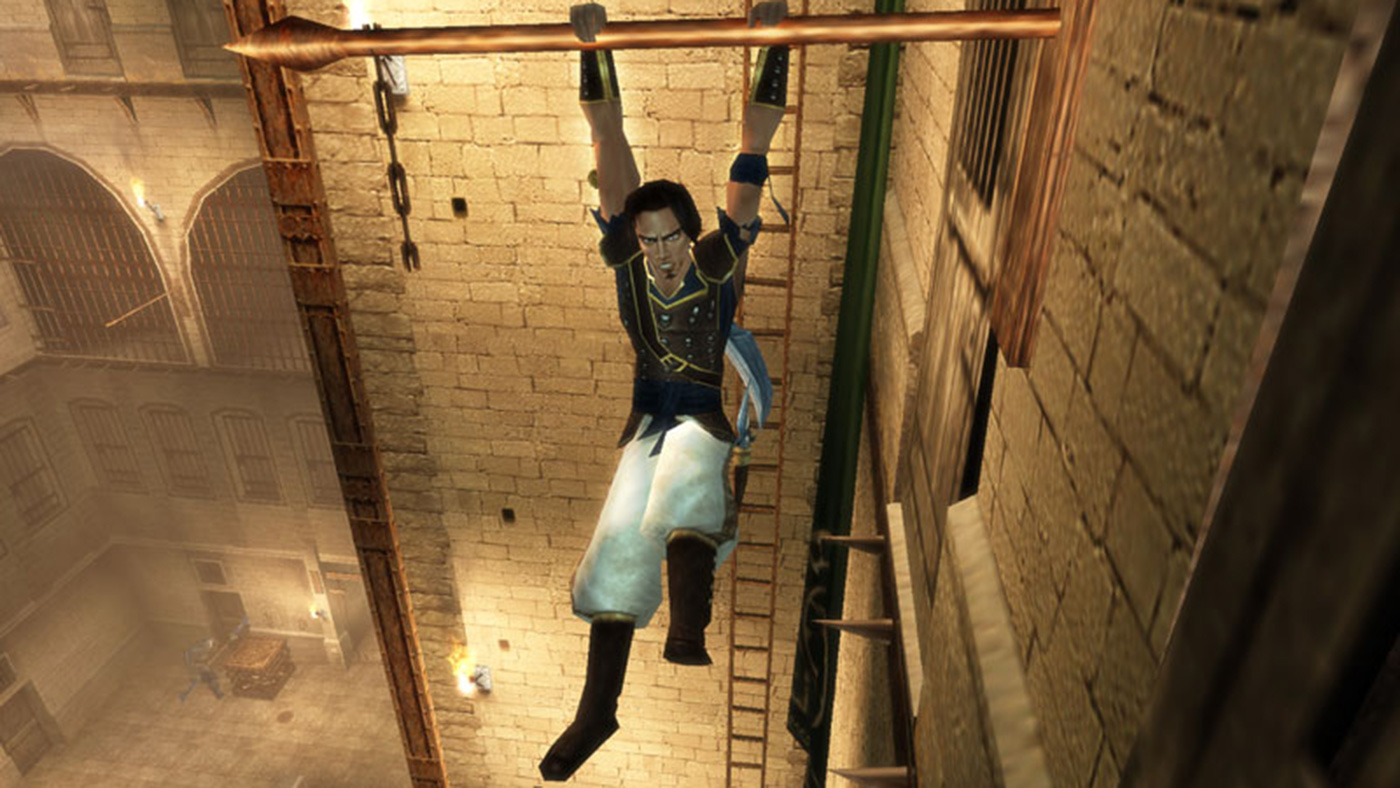 Prince of Persia: The Sands of Time

Nowadays, games are embraced for their ruthlessness and challenge. The original Prince of Persia was a brutal action platformer, and instead of pushing the level of difficulty to the point of punishing players - The Sands of Time integrated a truly awesome rewind feature to give the player a chance to correct some dumb decisions. The fact that the time manipulation was an integral part to the story made it even more memorable. The magic of The Sands of Time still stands as a unique experience that sequels and homages haven’t been able to replicate. - Justin Lacey

Singularity is a highly underrated game on many fronts. I think someone wrote a terrible review for it on our site years ago, but it was wrong. They aren't very creative with the name of their time manipulation device, as it is actually called the TMD, but it's a solid survival horror shooter. Not only do you travel back and forth through time which works well with the story, but they added a cool mechanic where you could move specific objects through time. You would use this to fix collapsed bridges, and doorways to help you get to certain areas of the map. - Coop

SUPERHOT somehow turned fast-paced shoot-outs into a methodical puzzle game without losing any of the adrenaline from its action. Your ability to move through the environment in a frame by frame manner somehow out matrixes The Matrix. Time only moves when you move, which allows you to pull of some ridiculous slow motion dodging, melee maneuvers, and headshots. Then, SUPERHOT plays back your awesomeness in real-time so that you can see the action hero you were meant to be at full speed. - Justin Lacey

Requiem was the first game I can remember playing that you could slow time down. It wasn’t front and center as the main mechanic but it sat along side other powers like turning people into pillars of salt. I still remember it to this day. The ability to dodge in and out of bullets flying past your head while raining head shots on enemies unable to move fast enough to avoid them was pure joy. - Ryan Billingsley

The 'clock' weapon in Castlevania, as well as I think a lot of other games, was always pretty epic. Maybe not the awesome slow-mo dive and John Woo shoot from Max Payne, but triggering a time freeze and just wailing on your enemy is pretty badass. I think that weapon/ability is common enough to be a trope and it's a big one. - Justin Gifford

Knights of the Old Republic II

I played through this in just a couple of massive play sessions, but I sure remember and loved using the Jedi power Burst of Speed to double my movement speed and whup some bad-guy ass with my dual light sabers. There's just something cool about moving so fast the bad guys can barely see you (and have their defense rating reduced significantly). - Justin Gifford

I didn't understand what Nintendo originally meant by Animal Crossing being in real-time. Basically, whatever day and time your game console says it is, that's what time it is in the game. So if you don't play for days/weeks and come back, the townsfolk think you've been gone for that many days/weeks. It helps you feel an attachment to the game and to the different seasons that naturally progress as you play through each month. Of course, you can cheat and just manually set the system clock ahead or behind to mess with the game. If you get caught doing this and your saves appear out of sync to the game, this will summon Mr. Resetti to appear next to your house. He punishes you by issuing you a long lecture about saving correctly and has your answer questions for repeat offenses. It's either the most effective or least effective punishment ever issued by a video game. - Justin Lacey 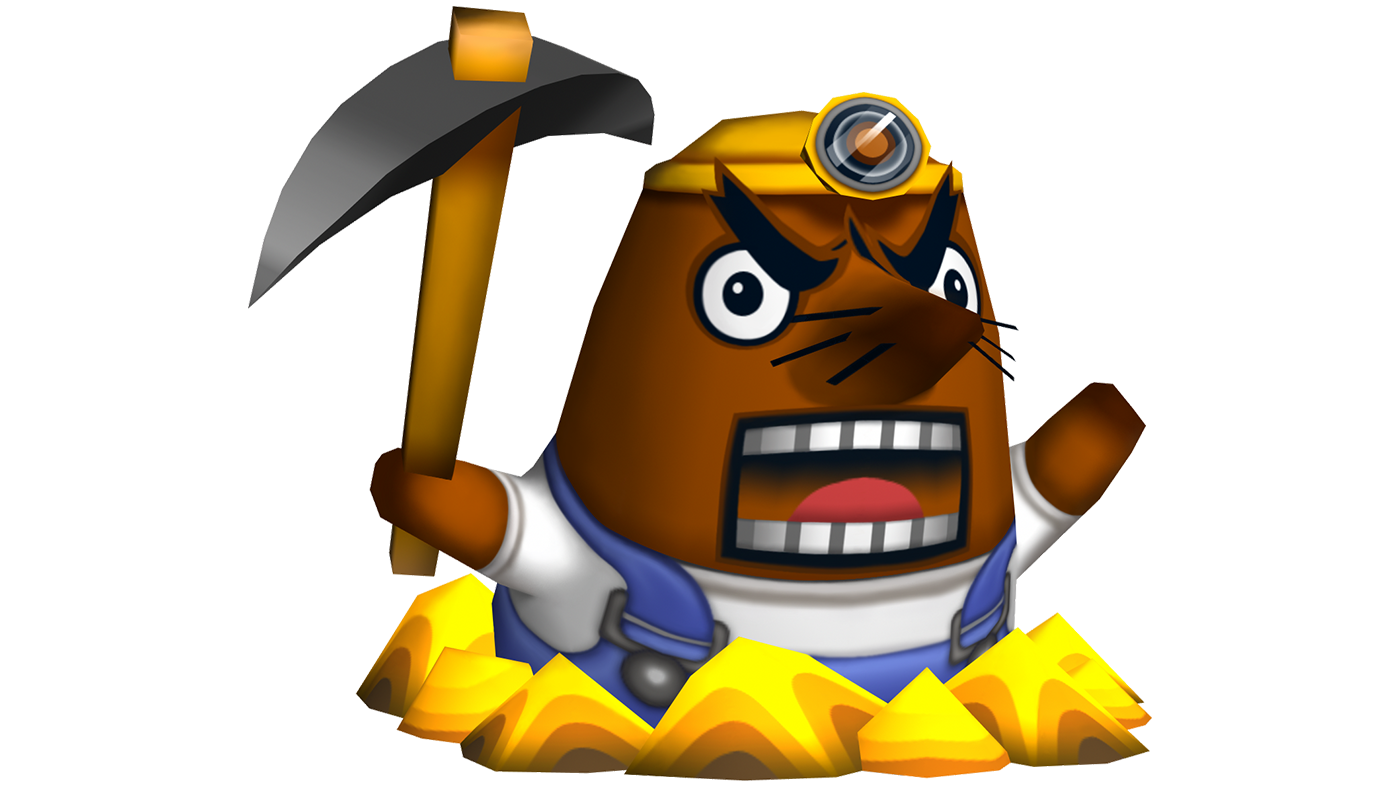 How has no one brought up Braid yet? The ability to rewind the game to fix a mistake you made, or even forcing you to rewind in combination with other mechanics like cloning completely blew my mind when I first played it. It was a truly unique way to solve a puzzle and worked extremely well. That game was genius. - Coop

Runners on first and second, one out, bottom of the ninth, up by one run. Your heart is pounding out of your chest. The pitch! A ground ball scorched to your right. You make a leaping dive at the last possible moment, snag the ball off the bounce and fling it to the shortstop from your belly. He flips it to first and thats the ballgame. This is all made possible with Show Time, a feature in Road to the Show, which lets you slow down the action to the level where us mere mortals who can react as fast as our heroes who dazzle us during those warm summer evenings. It doesn’t just work for defense though, you can also slow down an at-bat and make that clutch knock that drives in the go-ahead run, sending the game to extras or spot that cut fastball perfectly in the corner to get out of that jam. - Ryan Billingsley

No game exemplifies the magic of time manipulation more than Super Time Force, a game in which all three words of the time perfectly describe the premise. Plus Ultra if you waited for that version, cause that's an important word, too. After an inventor creates time travel, which results in his future self immediately appearing with said Super Time Force to correct the past, glorious chaos ensues. The kind of chaos that takes place in prehistoric times and a skateboarding dinosaur battles robots. The sort of madness where the screen is filled with multiple versions of the same characters performing different acts of heroism simultaneously. The delicious zaniness of spending 5 to 10 minutes to kill a boss in a single minute. 10 minutes per minute! That’s pure time math science! - Aaron McNeal 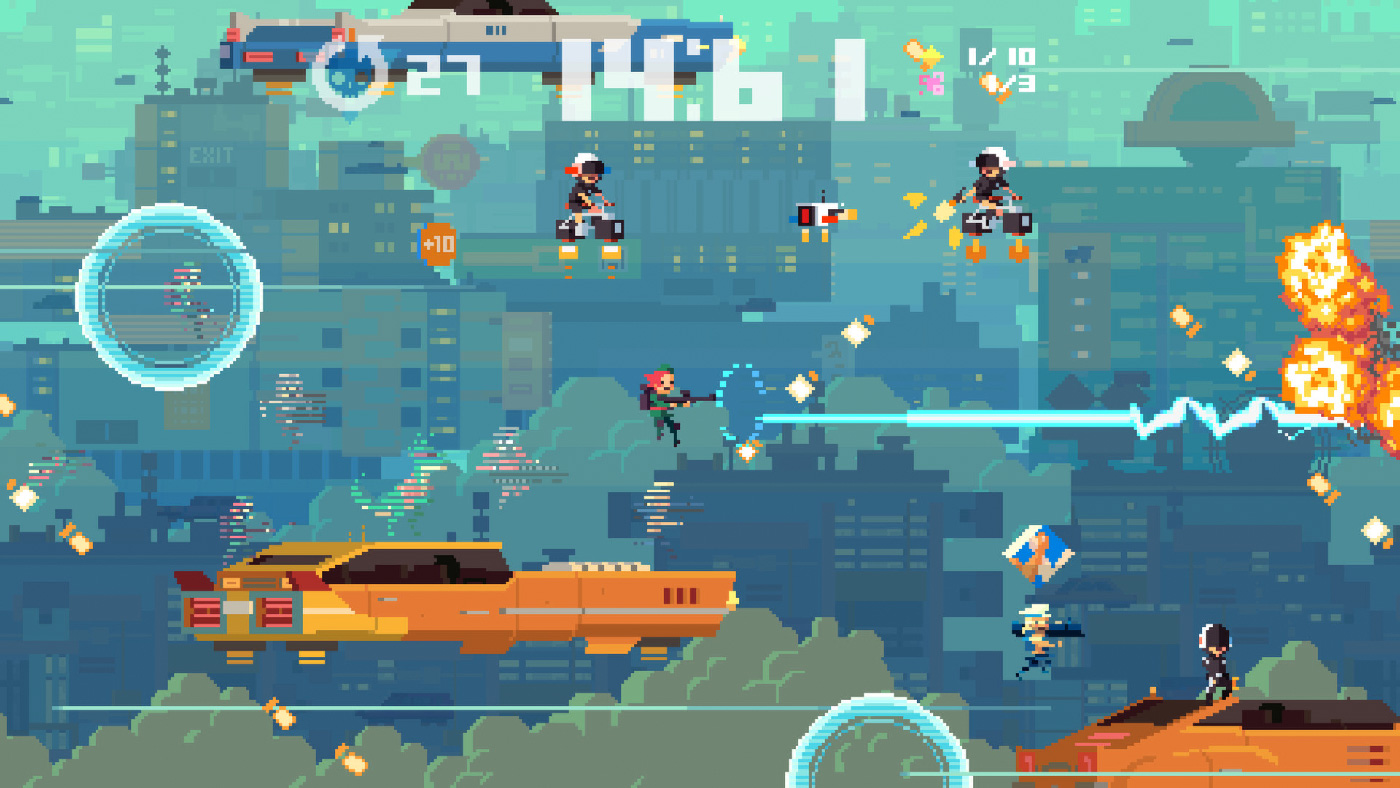 Burnout gets its name from the amazing sense of speed you get from maximizing your cars boost. It’s still exhilarating to this day and why I pay attention any time a Criterion alumni game pops-up somewhere. However, it was crashes and takedowns that really put Burnout on the map. Burnout 3 added aftertouch to its takedowns - which were the high speed crashes that the game encouraged you to pull off in order to earn more boost/speed. Aftertouch allowed you to crash into other cars and for a moment redirect those cars so that they could crash into other cars. Essentially, time would freeze and you could use opposing cars as missiles to shoot at other cars to cause even more ridiculous wrecks. So much awesome can happen in such a short amount of time, and yet, you never feel like you’ve lost control over your car that’s going 200 mph. - Justin Lacey

For some reason, my grandfather had Time Pilot on his Commodore 64, so when my parents shipped us off to Pennsylvania so they could have a kids-free vacation, I played a lot of it. A top-down shooter, you controlled a...fighter space ship that traveled through time, I guess? Anyway, you got to shoot down WWI biplanes and WWII prop planes, modern fighter jets and then finally futuristic ships. There's no depth here, but if you ever wanted to know what would happen if the Red Baron tried to take on Maverick... it's not pretty. - Justin Gifford

The Legend of Zelda: Majora's Mask

Your opinion of the weirdest Zelda game is entirely dependent on whether or not you embraced its time travel mechanic. The entire game takes place over the course of 3 days, and if you don't save the town by the end of Day 3, it's game over. Of course, you can play a song to travel back to Day 1 to try to continue saving the world. It's basically Groundhog Day the video game except Link is Bill Murray. - Justin Lacey 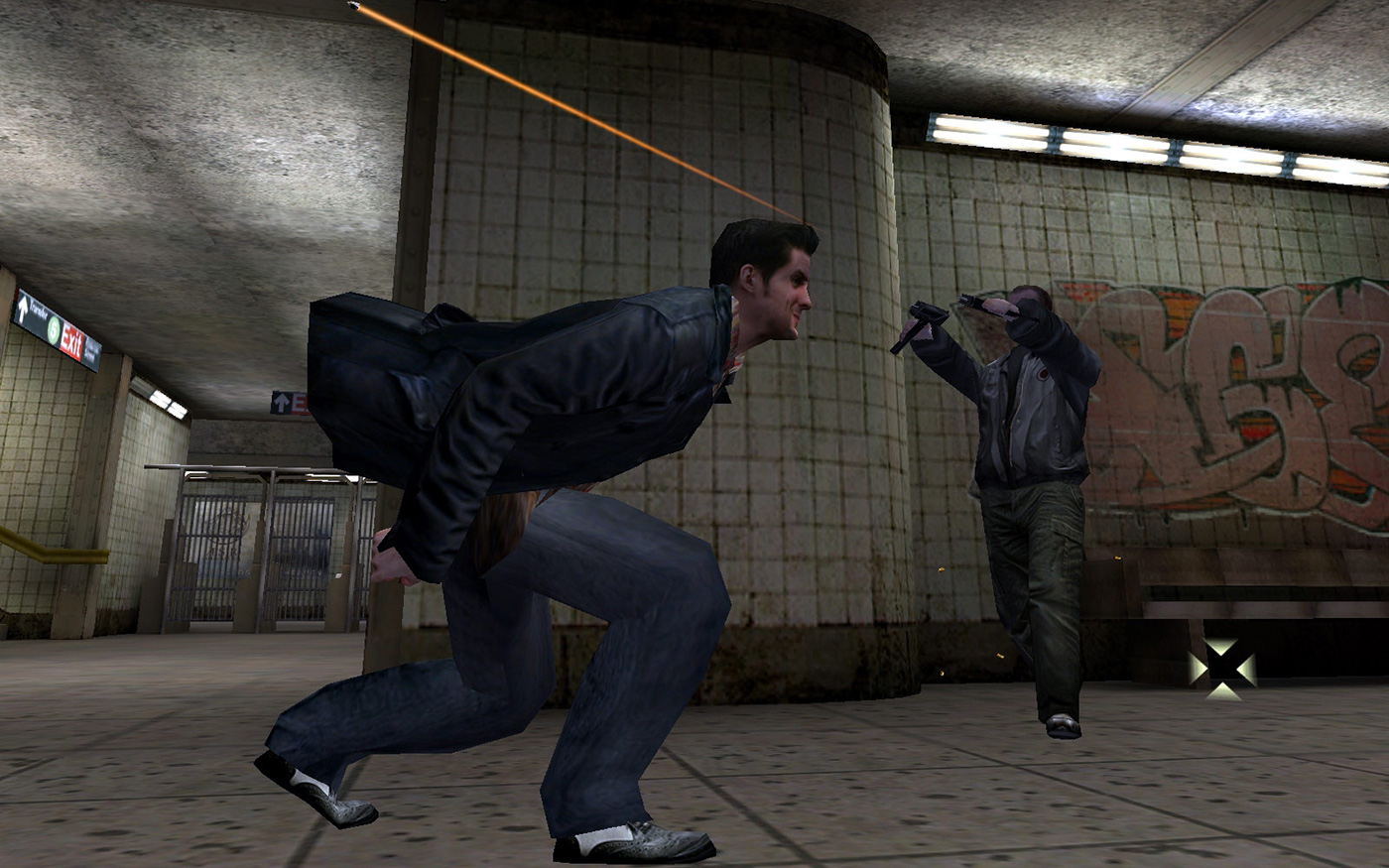 Man, the first Max Payne was incredible. Was it necessary to constantly do a dive roll, firing from akimbo pistols, absolutely every time? Nope, and that's why it was amazing. Even grabbing an assault rifle and slowing time down and taking out five guys in a room was really fun. Not as fun as diving sideways, shooting akimbo uzis into a hallway, but fun. This game set the bar for “bullet time” in a video game. - Ryan Billingsley