Justin isn't going to sit idly by after someone hacks into his brain. He's definitely going to fight and fail over and over again until he outlasts all of his enemies. Ruin them with attrition. That's the motto.

I've been in so many dungeons over the years and first impressions are important. I was immersed in Vaporum from the first valve that I had to turn. I saw gears move and doors slowly open and I had to go deeper (or in this case of a dungeon tower, upwards). Just as I got comfortable, the enemies started showing up I was impressed with just how balanced the game felt. Exploration, survival-focused combat, and puzzle-solving around deadly traps all have to make an appearance, but can't overshadow one another. I don't know much about the team behind Vaporum, but it definitely felt like they had designed a dungeon or two before.

The last few dungeon crawlers I've played had me control and entire group of adventurers, Vaporum just has you focus on a single character in your choice of armor rig which serves as a class selection. I wasn't sure how the game would handle its equivalent of magic because melee weapons and guns do not provide enough variety, but its elemental gadgets led to some fun area of effect attacks that felt at home in the game's universe. The skill tree also more than makes up for the complexity lost by not having to manage more than one character. It's a personal preference, but there's something more engrossing about exploring a dungeon completely alone than having group members to fall back on. 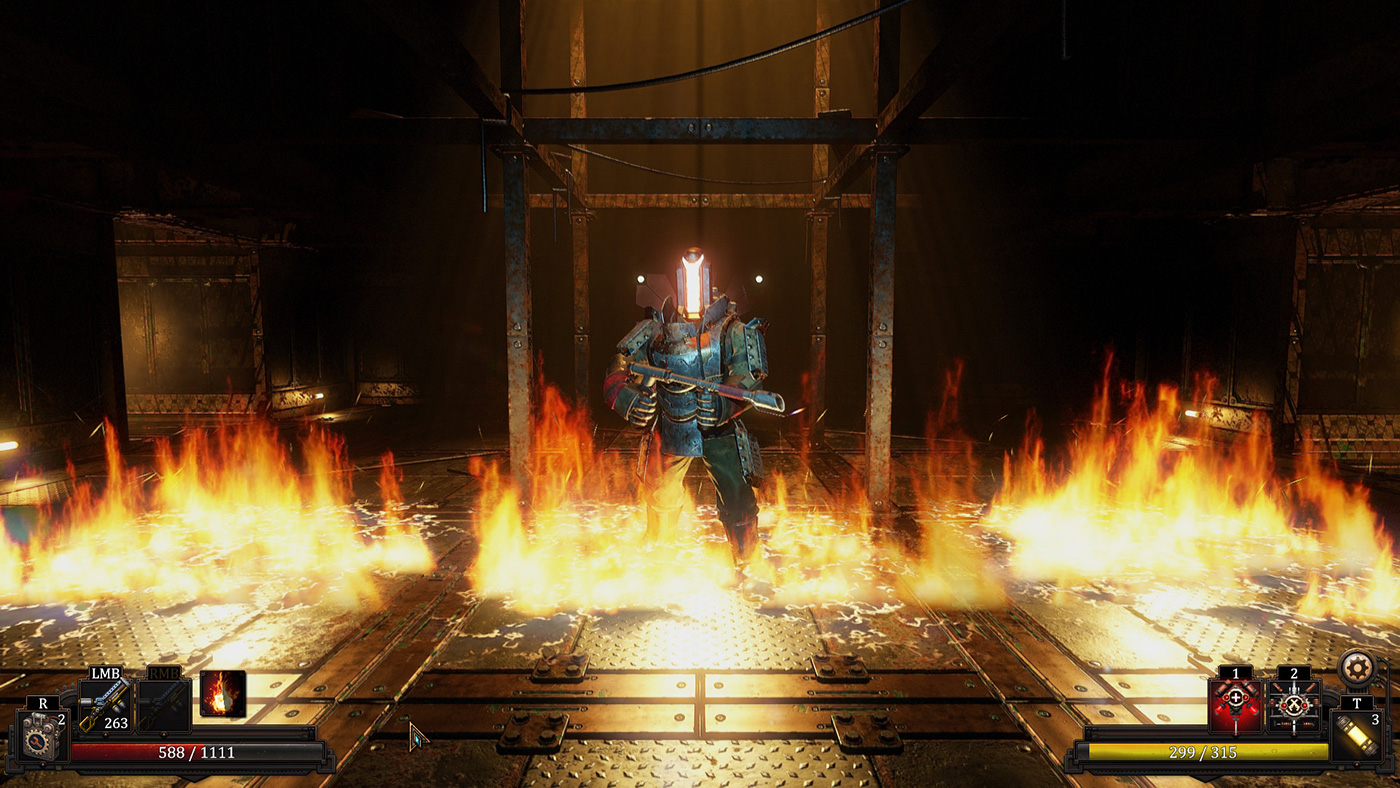 I was surprised to find organic enemies alongside the more robotic enemy types. I was expecting to only have to worry about metal on metal damage, but the combination of enemy types encourages you to pay attention to what type of damage your doing as enemies will naturally have different strengths and weaknesses. This prevented me from falling back on the same tactics for every encounter and I like it when the dungeon's minions keep me on my toes.

Vaporum also has a decent story and the tower you explore feels appropriately creepy and lived-in. It's too early to tell how everything comes together, but some gnarly stuff went down and the audio and text logs do a good job of peeling away the layers of its true nature piece by piece.

Of course, what really sealed the deal for me in Vaporum's dastardly tower was the first time I fell victim to a trap I never saw coming. This is why we save often and new players need to abuse quick saves. You can always replay it again with more save restrictions, but if you're like me, you're going to make a lot of dumb mistakes until you get the hang of things. I didn't run into unfair deaths and the trickier puzzles eventually revealed equally clever but fair solutions.

I really enjoy Vaporum and managed to fight my way through to Floor 1 by the end of my first session. There's a lot of reasons I want to come back. I expect a lot more gaming sessions with this one even if I'm not good enough to finish the entire game.

Vaporum is available now on PC.