2017 was one hell of a year for video games. It seemed like the release schedule was non-stop. There were days of multiple heavy hitting games being released all the while I was still playing a ton of Rocket League weekly. It’s been a year of playing a lot of great games, but with other life commitments, it was hard to finish everything for me. While I can’t say I finished every game on this list, I played enough to know where each of these games stand within my own definition of game of the year.

The games below all deserved more of my time this year and hopefully I’ll get to them at some point in 2018. That’s doubtful but a guy can dream…

Got into this one right before this list was written. Super deep and I think there might be some co-op sessions you might hear us talk about in 2018.

I know, I know. The moments. Don’t care so much for the shooting but even what I’ve seen of the moments makes it deserving of a call out on my list.

What a great refreshing take on the old JRPG trope. Really like everything about this game from the art to the combat. Will be playing some more of this in 2018.

Just barely scratched the surface of this game and it’s one I’m definitely going to keep playing. The graphics and the sound design alone makes this one a must see, not to mention the story they’re trying to tell through mental illness.

10. What Remains of Edith Finch

I’m not going to say a lot about this game other than you should go play it. It’s 2 hours. I loved it. It’s been over a week since I finished it and I still can’t figure out what I want to say about it. It’s haunting, yet beautiful. Warning, it can cause feelings. Can’t wait to see what’s next from Giant Sparrow. 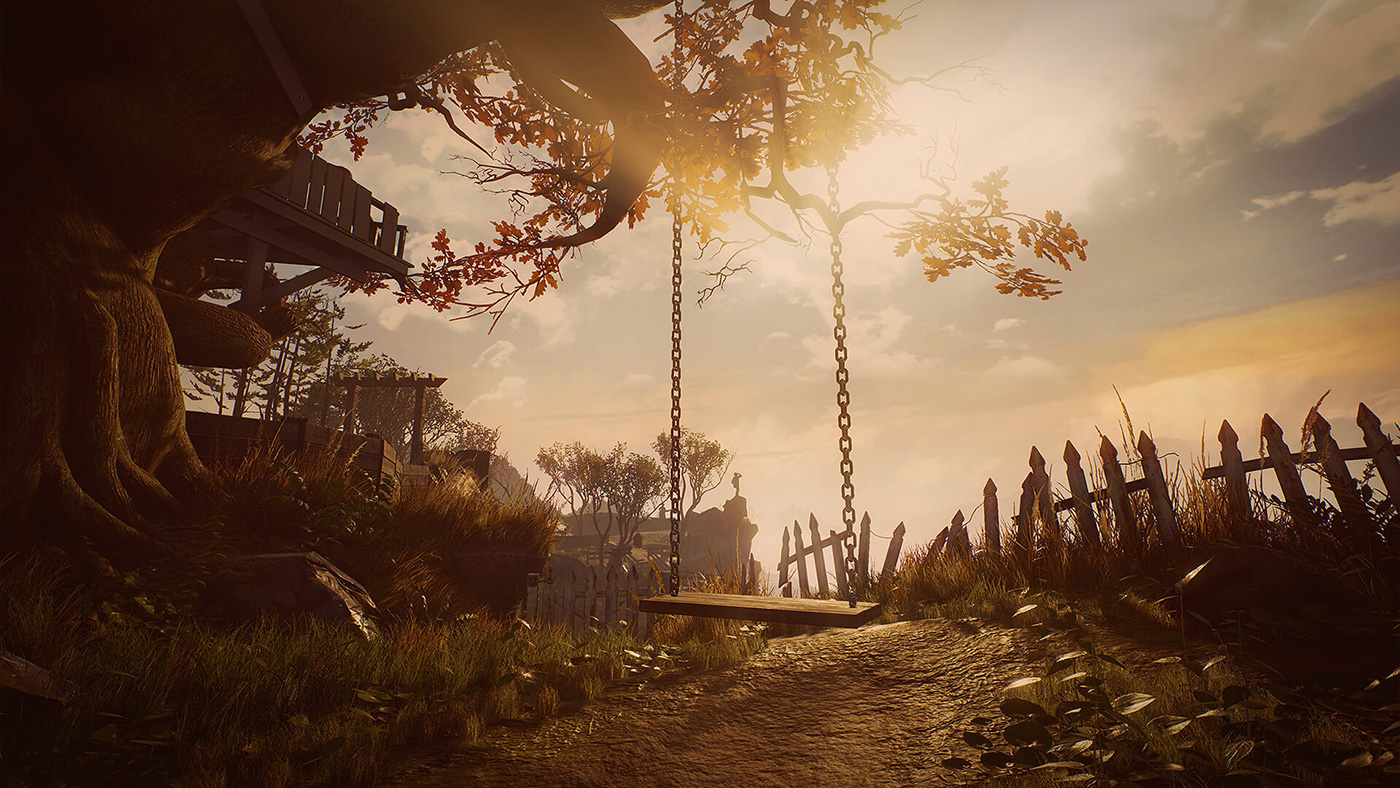 Right from that E3 reveal in the montage of upcoming games that piqued everyone’s interest, my hype for Cuphead was strong. Defeated by the overall challenge of the game and not spending the time I needed with it in order to get good, the graphical stylings and music still give me great pleasure in that things like this can be achieved in gaming. It reminds me of Contra and the memorization needed to beat that game back in the day yet updated, more challenging, with better controls. It still is hard to believe that a game can look like that and control so well. It’s a game I will continue to peck at in the years to come. 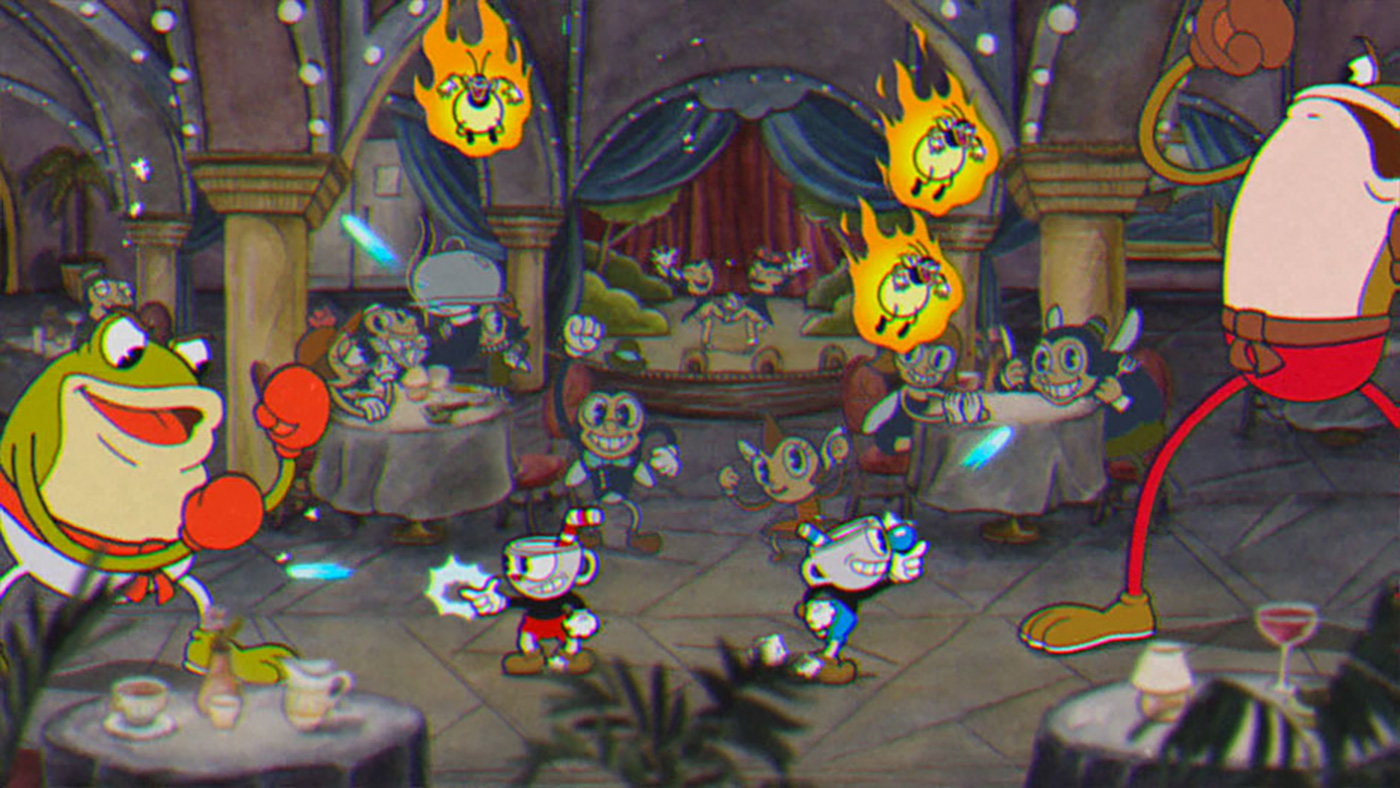 Similar to Cuphead for being a game that I love everything about, but also one that derailed me from continuing to play it because of the difficulty. I don’t have a lot of patience to continue to play a game that I’m just not that good at. That’s not a knock on this game at all, just with life and other games happening, it was difficult for me to “get gud.” It would be higher on my list if I got further in the game, but I needed to recognize it because I’m the one at fault here, not the game. 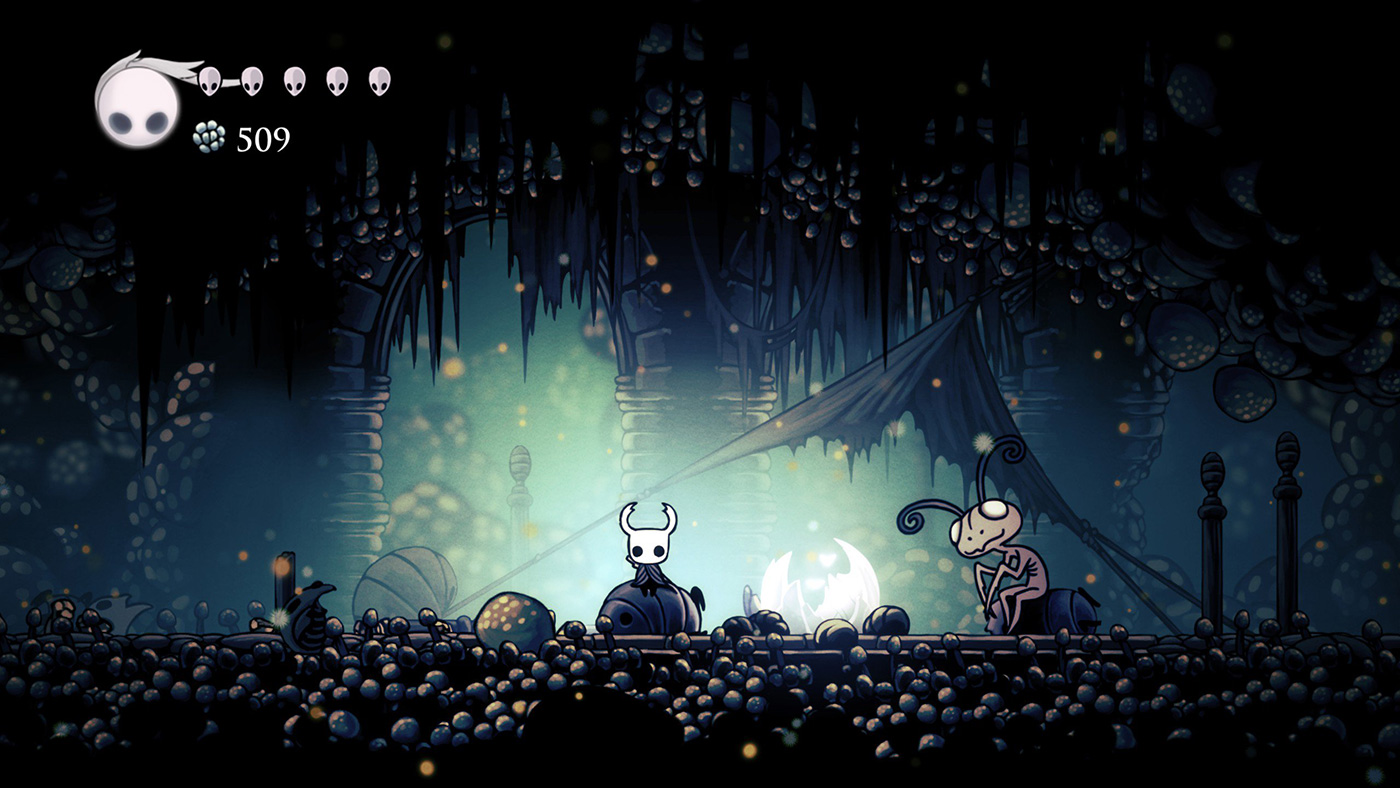 This game would have been higher on my list in any other year. But for the sheer number of amazing games that came out in 2017, to think that a golf game was going to make my top 10 was downright ludicrous. Yet, here we are. Calling Golf Story just a golf game is woefully underselling it. If you’ve been following the site for a long time, you know that I have a passion for RPGs and by adding that element while also looking like a SNES game ( see a pattern), Golf Story made golf way more fun. Keeping the club selection and shot taking simple, while adding other ‘mini-games’ using the same structure, meant the golfing was never going to get in the way of the story. For a game to make me actually laugh out loud is almost impossible. Golf Story did it multiple times this year. 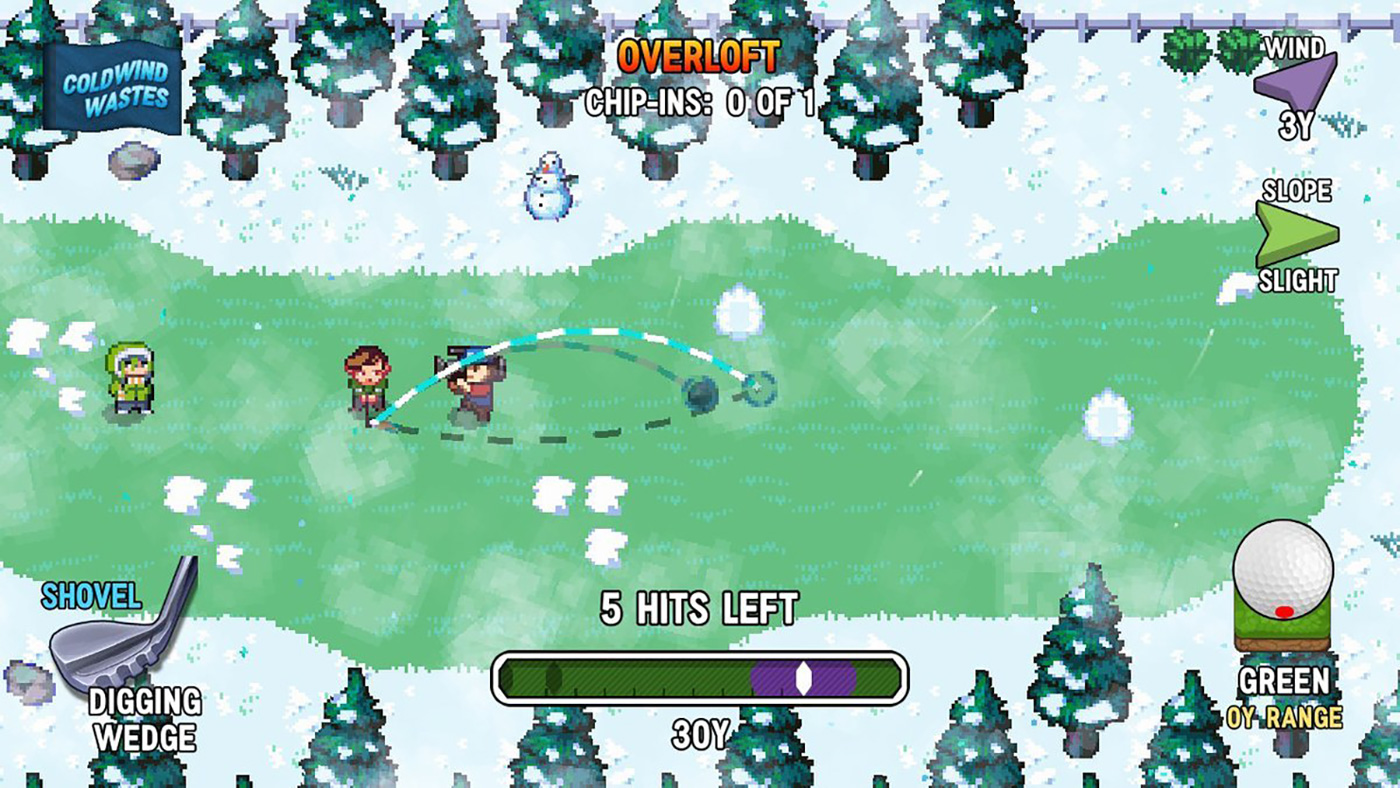 There is absolutely no reason this game should be on my list or even this high. That I would actually love an Assassin’s Creed game is my biggest surprise of the year. This is the first of three open world games in my top ten list and this one featured some quality of life improvements that will influence other open world games to come. Along with Horizon and Wolfenstein II, this is the year that I finally came to terms with the fact that it’s okay to play on easy. As you’ve read, difficulty in games tends to make me fall away from them quicker than I would if I didn’t have to play the same thing over and over again. Playing on easy and being super cop Bayek, made Origins even more enjoyable. From the ridiculous Predator bow to the amazing sights and sounds of Egypt, Assassin’s Creed Origins is one of the most fun and impressive games I played this year. Friend recommendations are strong… even when you write a series off. 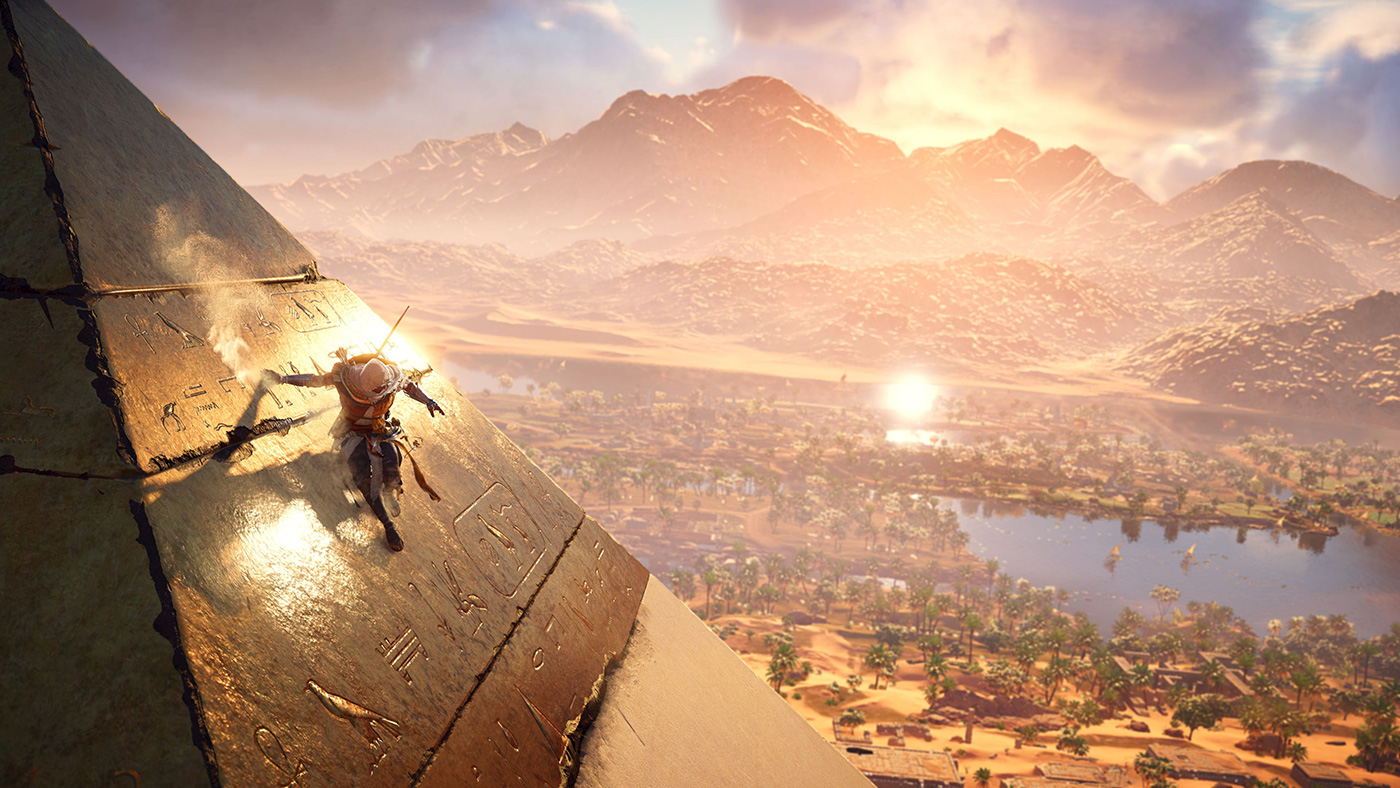 For the second year in a row a sports sim game has made it onto my top ten list. I love what EA has done the past two years with FIFA and the Journey mode featuring Alex Hunter. The way that they are able to make me FEEL about the journey a young athlete is on while he tries to navigate the ups and downs of a professional soccer player, keeps me going back to the game long after I’ve finished the Journey. For me, those feelings continue through to the career mode and my created player even though I’m the one creating the stories for him in my head. The way this year’s story features a couple of new controllable players has me wishing for more of that in the coming year. Representing your digital country brings a sense of pride and anxiety that I never thought I would feel playing a video game. Soccer is great. FIFA is great. I’m guessing you will be seeing a FIFA title on my top ten list next year as well, making It three years in a row. What the hell. 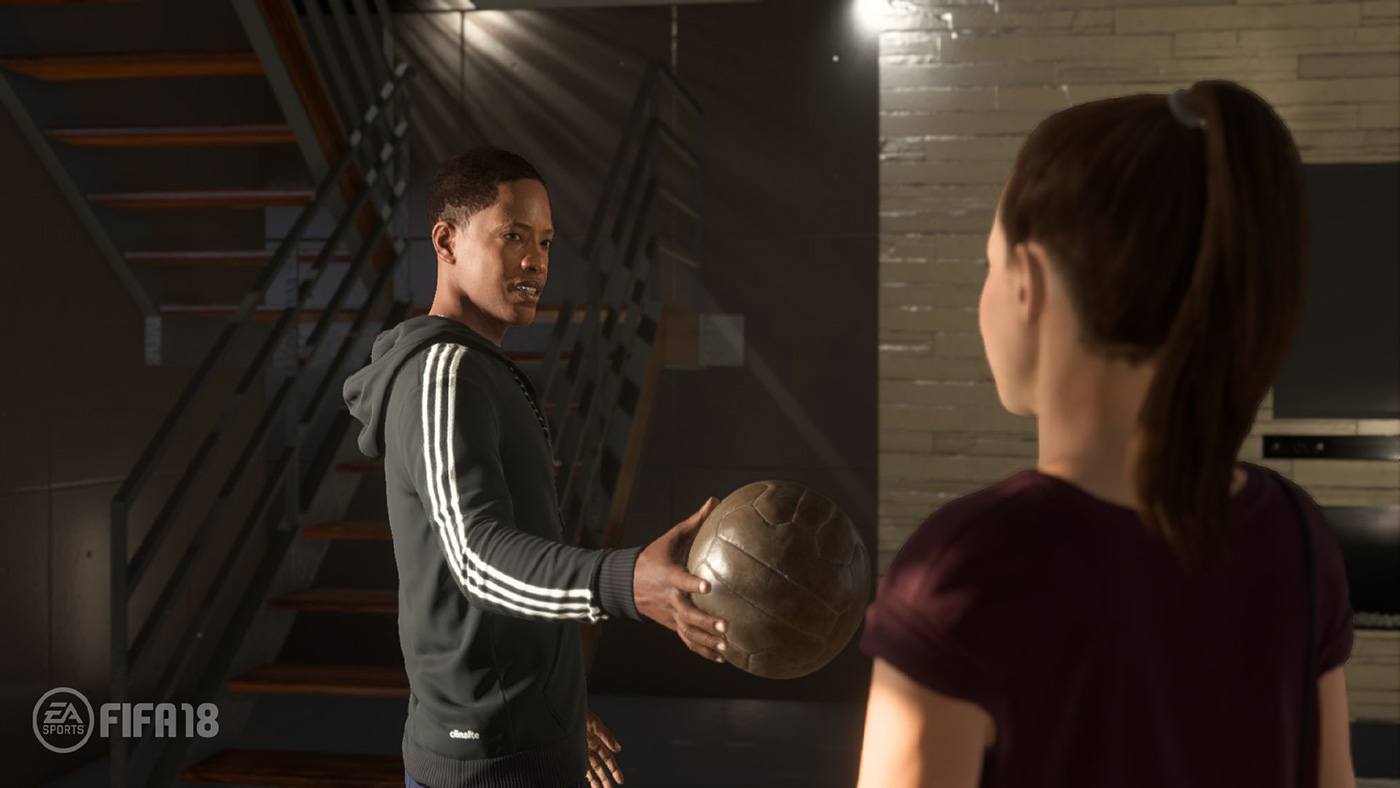 4. The Legend of Zelda: Breath of the Wild

I can’t believe I’m putting this game at number 4 on my list. In any other year it’s number 1. That’s how strong this game is, and how strong 2017 was as a whole. It’s not a perfect game, but it’s a beautiful and wonderful experience that I never thought I’d have again with the Zelda franchise. Nintendo changed the definition of what it means to be an open world game. For the first time it appears that the people developing Nintendo games are actually playing other developer games. WARNING WRESTLING REFERENCE IMMINENT. Back in the late 90’s ECW took a different approach to wrestling. By focusing on what the talent was good at, and de-emphasizing everything they were bad at, made characters like Sandman compelling (fyi… he’s a shit wrestler). Nintendo does similar things. Developing on inferior hardware, Nintendo makes the most of its products and remains an influential leader in all of video games. Breath of the Wild is also a grand look at what the future of Nintendo looks like, after the Aonuma’s and Miyamoto’s of the world start looking towards retirement. 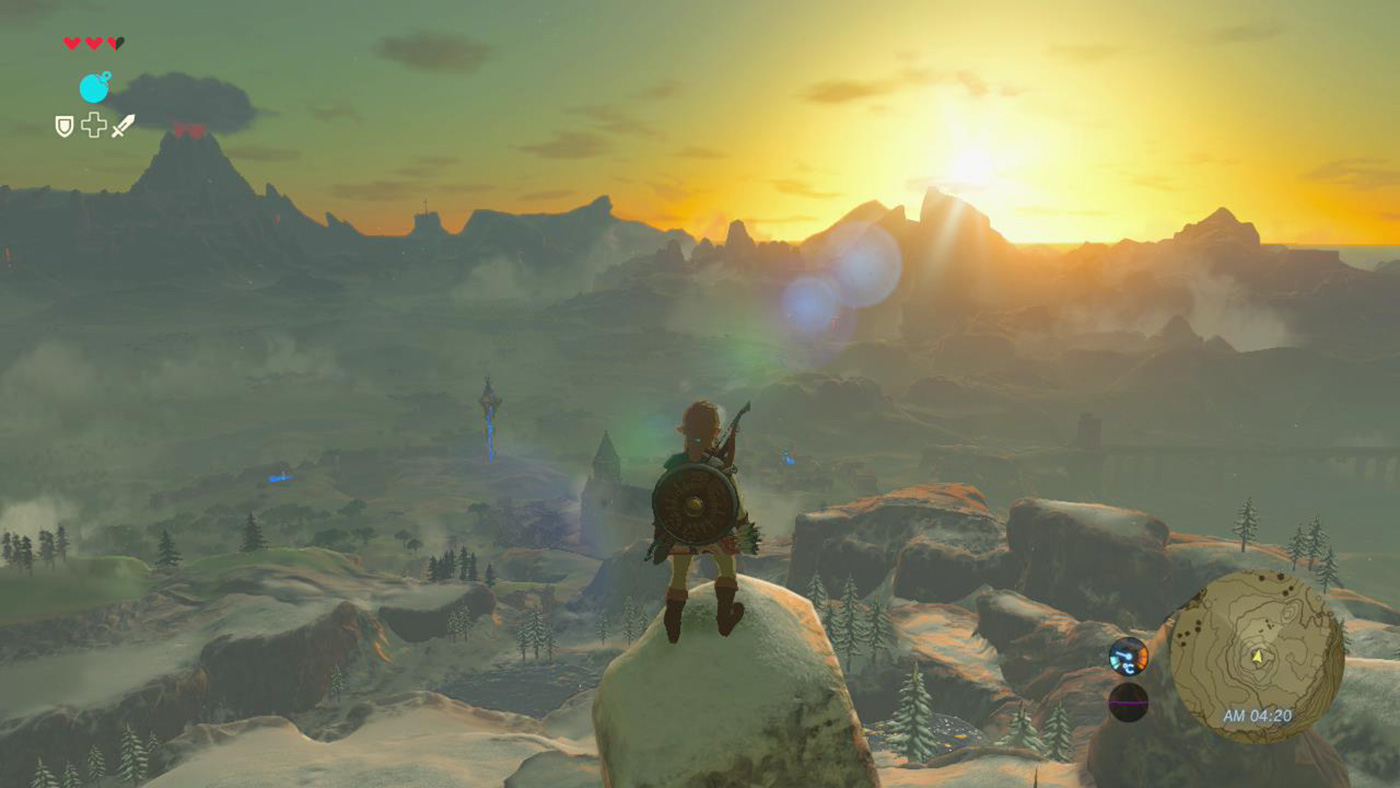 Remember back when you first played the original Super Mario Bros. or Super Mario 64? Those are the same feelings I got when playing through Super Mario Odyssey. I wrote earlier about how Golf Story made me laugh out loud, Super Mario Odyssey was the game that made me smile more than any other game this year. The best part: I’m no where near being done with that game. I blew through the “story” and then the game really opens up and ramps the difficulty way up in some parts. That’s what I love about Mario. We have to remember that Nintendo traditionally makes games for children with Mario leading the way. I love the fact that Odyssey is so accessible for young kids and people who don’t play a lot of video games. Like Pixar movies being for kids but having enough in those films for adults too, Nintendo does a masterful job with Odyssey providing content for both the young and old. Nintendo brought it in the first year of the Switch in a major way. 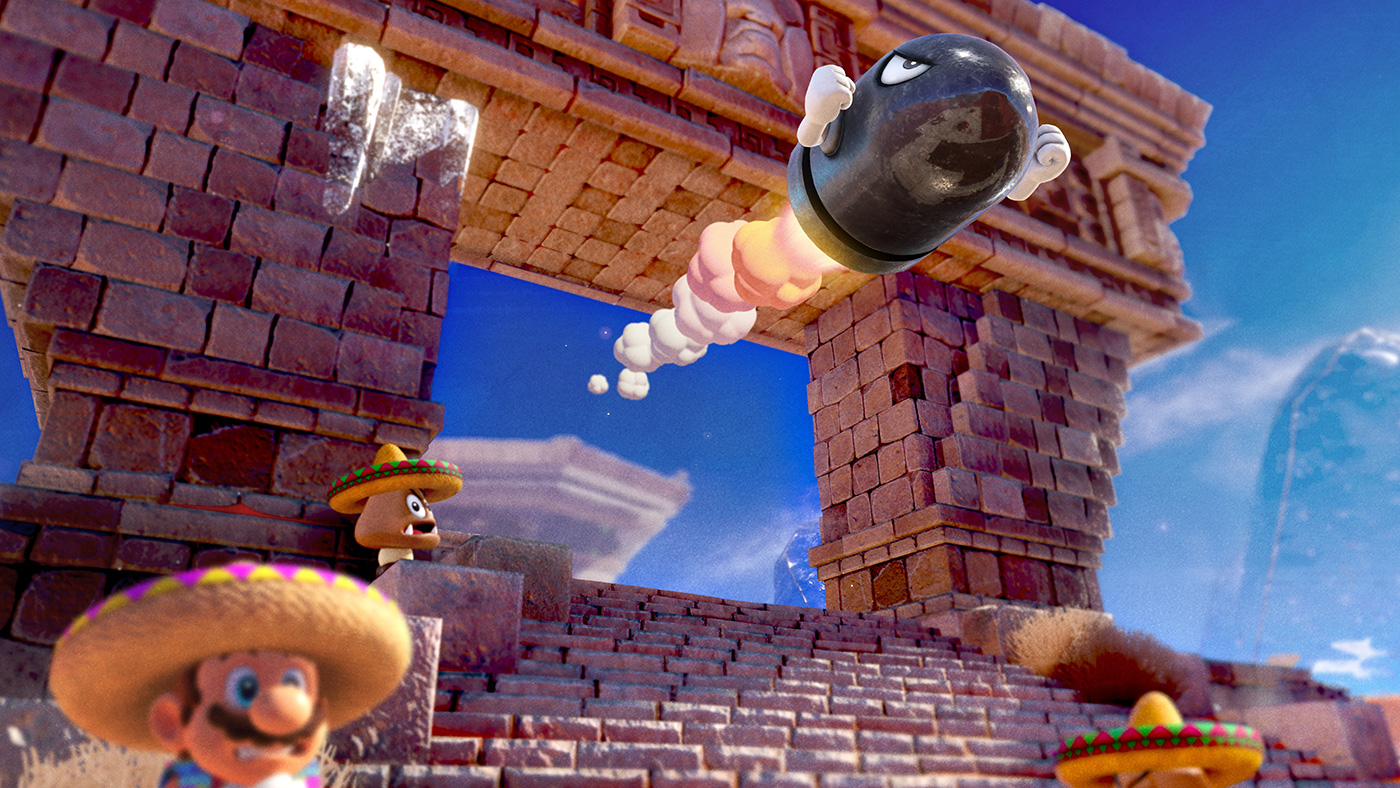 I haven’t finished this game. However, what I have played is so damn strong that I have no qualms about putting it at #2 this year. I’m struggling with the words to even describe how and what this game made me feel in the 20 hours I’ve put into it. People might write it off as some super Japanese anime bullshit but it is so so so so so so so so much more than that. Nier is about some deep meaningful shit rarely found in games of this type. It embraces it in a strange and wonderful way that can get me to tear up by just listening to the soundtrack. AND I HAVEN’T EVEN FINISHED THE GAME. I know there is more to uncover. Did I mention the music? 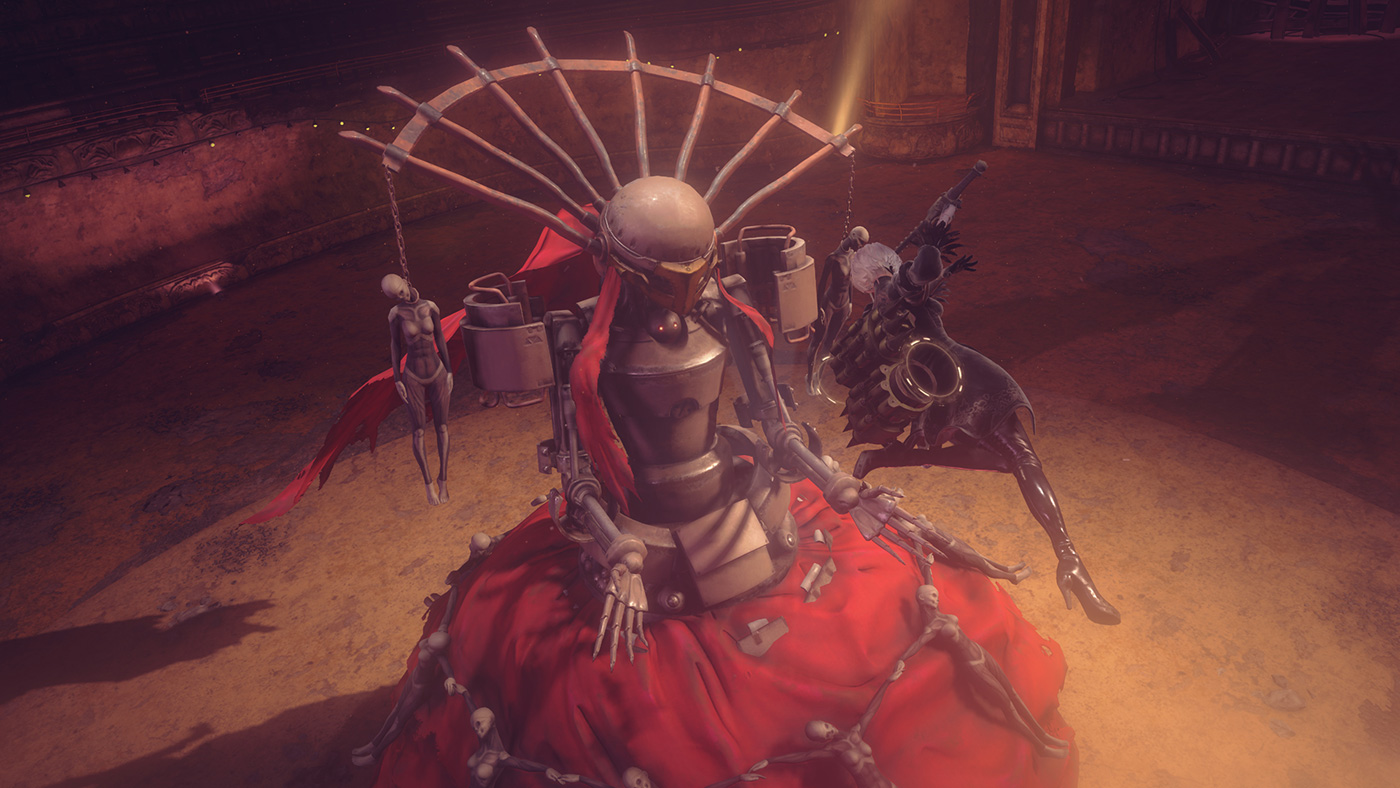 What the hell Guerrilla Games? You expect me to believe that your first game outside of the Killzone series is going to be one that not only moved me emotionally, but also told the best story? Horizon did just that. From the opening few hours developing the relationship of young Aloy and Rost, to the reveals about the nature of the world this game takes place in, nothing touched Horizon this year. I’m a sucker for any type of post-apocalyptic world building and Horizon does an amazing job at building a believable post-Earth, while featuring ROBOT FUCKING DINOSAURS.A few years ago, we proclaimed it the year of the bow, but 2017 was the year of the bow for me and Aloy led the way. One of the best overall open world experiences I’ve ever had. Thank you, Guerrilla, for changing directions and executing on your vision. Thank you Sony for allowing that to happen. It won’t always work out, but the fact that Guerrilla had the freedom to do something completely different should be a sign to other publishers that letting developers take chances can lead to amazing achievements. 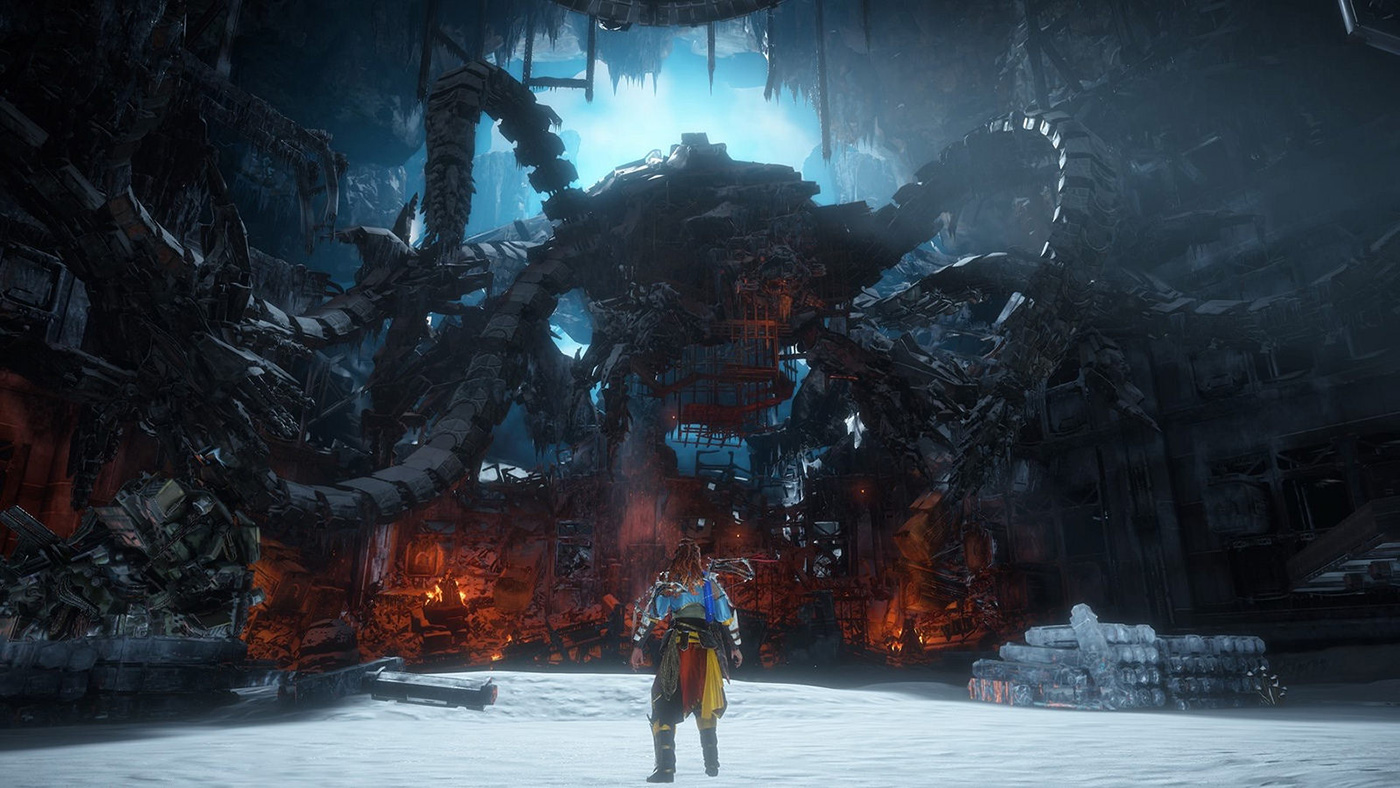