Firewatch is a good book. Justin brought that up and it resonated with me. I would go even as far to say it is a great book. Once I started I knew there was no stopping, I had to see this story to its conclusion. I had to know what would become of “Hank” and this woman who had been my sole companion for the past four hours. We had forged a bond through confusion, anxiety, fear, and resolution. Then, as I climbed those stairs, I was eerily aware of what I was going to find...

(Courtesy note - This article does not delve into the plot or major spoilers for Firewatch, but it does contain light spoilers focused around atmospheric descriptions of the game itself.) 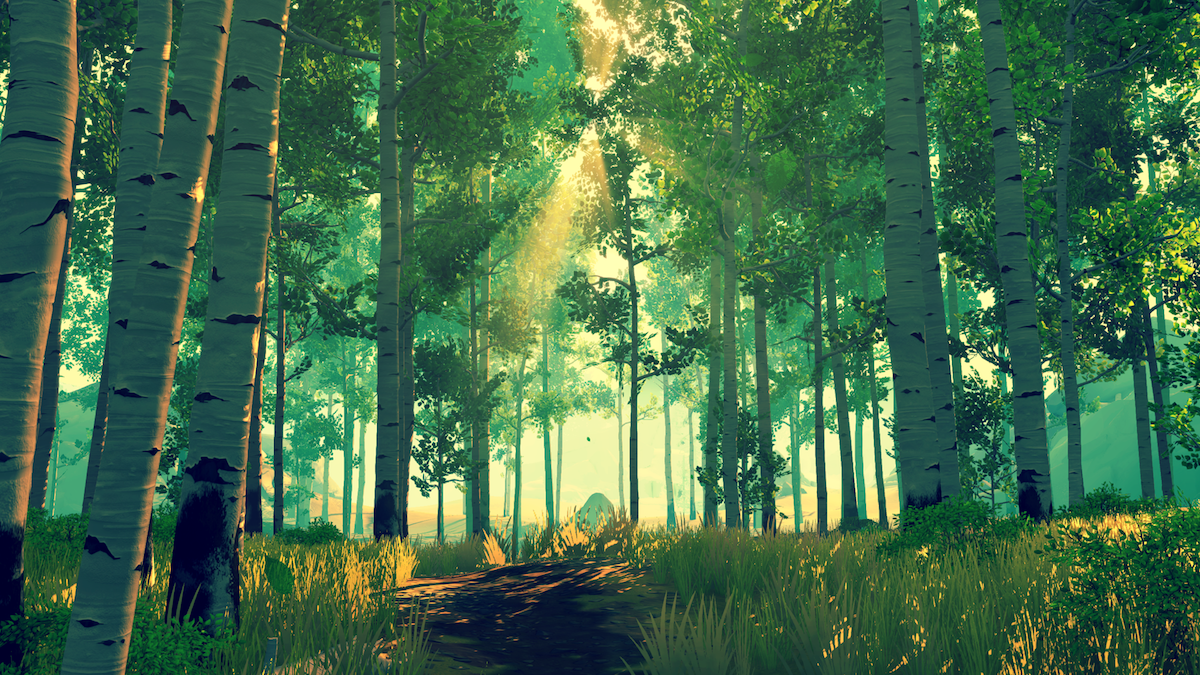 I backpack in the woods and have experienced the feeling of isolation all the while feeling not quite alone. Usually my anxiety is linked to the howl of wolves off a distant hill and not the lurking presence of another person watching, waiting, but the feeling that you are cut off is still the same. There are times in Firewatch where you feel alone. The music fades away and there you are just walking through the Shoshone Wilderness. There is space for you to think, to process as you make your way to the next waypoint. You hear the bushes as you move past them, it is surreal. When the silence is broken, it is used to great effect. The rhythmic beeping of the wave sensor, slowly increasing its tempo and pitch, drawing you ever closer to some unknown in the woods will have you on the verge of freaking out. There were times where I was really afraid my wife would touch my shoulder and I was going to scream and wake my kids up, I was so tense. It was great.

Firewatch stands out. The puzzles you solve are life’s puzzles. There aren’t levers that need to be pulled, or platforms that need to be jumped on with expert precision. You read notes. You look at pictures. You find clues. You have conversations to work through a jumbled mess of thoughts bouncing around in your brain like an angry hornet’s nest. It is refreshing.

The rhythmic beeping of the wave sensor, slowly increasing its tempo and pitch, drawing you ever closer to some unknown in the woods will have you on the verge of freaking out.

The characters come to life through radio communications and tape recordings. The only other person that you actually see is a generic helicopter pilot. Everyone else is a creepy silhouette on a hill or a voice in your head that you question whether it even exists, fearing your paranoia has completely overtaken you. Delilah, your quirky, somewhat neurotic, supervisor finds a way to touch you through dialog trees and audio clips where many fully present game characters fail. Missing an opportunity to talk with her was devastating. Fumbling about with a map and not getting to my radio fast enough would leave her feeling ignored and she would “give you some space.” She is endearing, honest, real. Well my Delilah is. Yours may be overbearing, invasive, an annoyance, but that is your choice to make. My Delilah was always there for me, until she wasn’t.

Firewatch is not a perfect book. I have read so many great books that feel hurried to wrap everything up. The need to tie loose ends is rushed on you and doesn’t match the build up you experienced getting there. Firewatch has this same problem. I felt a little cheated by the answers. I wanted there to be something a little more. I felt like I was being led toward some grand conspiracy but then it never arrived.

Missing an opportunity to talk with her was devastating.

I don’t know what I expected with Firewatch. Honestly, the only reason I knew about it was because I follow Cabel Sasser, co-founder of Panic, Inc. who published Firewatch, on Twitter. I could not have predicted how different it was but it was very welcomed. It is a narrative that you can be drawn into, consumed by, and finished in a night. It is a great piece of storytelling that is not confused about what it is.

Firewatch is an accomplishment. I haven’t even mentioned how beautiful the game is and how impressive the work of Olly Moss, Jane Ng, and entire the team is. The visuals are complimented by some amazing sound design and a great score that complete a rich atmosphere that is worth losing yourself in. Firewatch is such a amazing package. I am already looking forward to playing again, but I want to take some time away so that I can try and relive this experience again as much as that is possible.