The Star Wars experiences got the force flowing again. The Battlefront II reveal also showed some promise. Of course it all adds up to looking back on our Star Wars video game nostalgia. 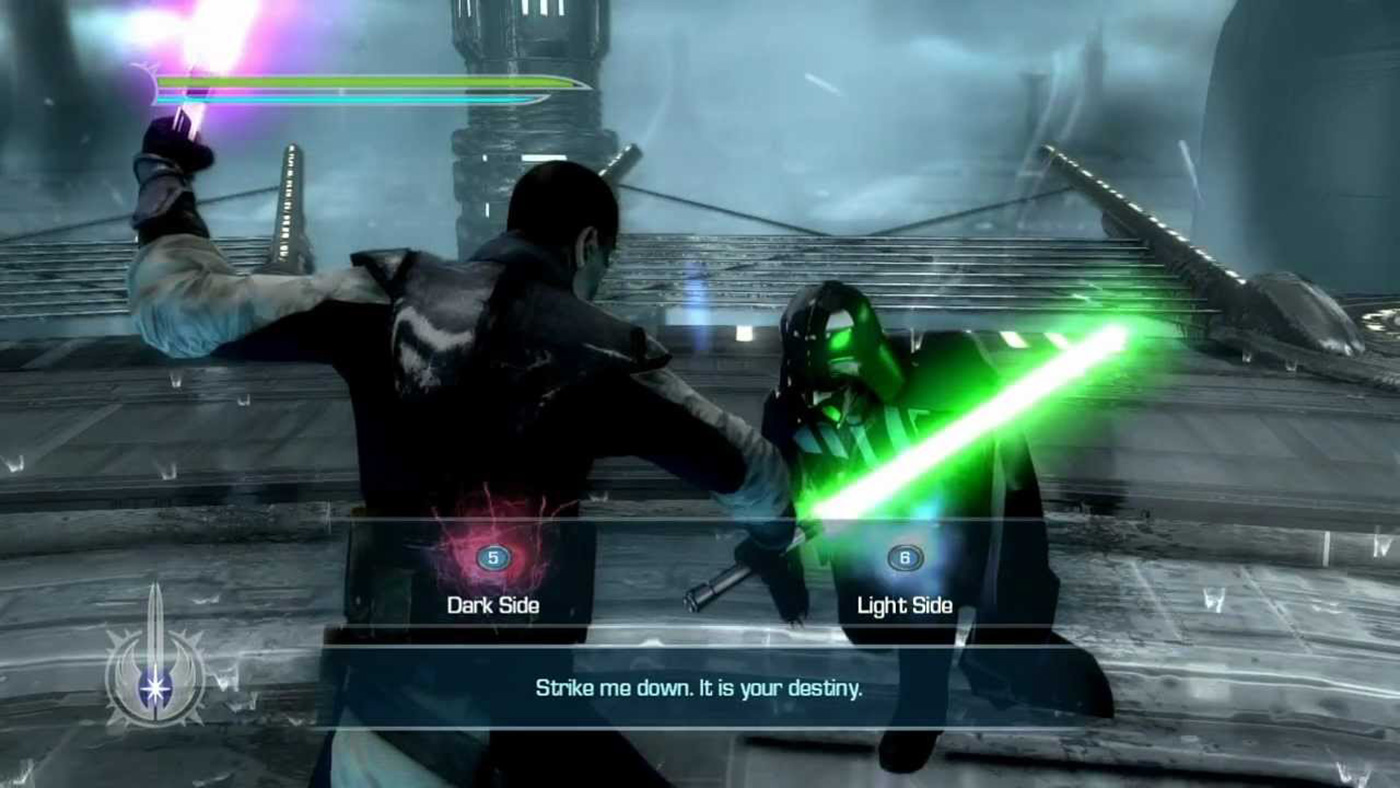 Justin Lacey
Jedi Outcast was when the force came together for me. The previous game, Jedi Knight gave me a taste, but there was just something powerful about building on those abilities in the sequel. I was obsessed with the game and played it multiple times, coming back to it with every upgrade of my PC for a while. Beyond the force powers, it really made me feel like I was a character in that universe and that's something I wanted from the first minute I met Luke in the movies.

The only good thing I will say about the prequels is that I got some sort of strange satisfaction from The Phantom Menace game. It's not good and it retells the story from the movie so that's another deterrent. However, fighting alongside Qui-Gon against droidekas in the opening sequence was really fun. It stood out to me because I was so into the movies at the time, and this just extended that feeling. I just wanted more Star Wars and playing as padawan Obi-Wan is cool, even in an ugly, mediocre game.

Aaron McNeal
Star Wars Kinect and Star Wars Episode One: Racer. The catch is that they're both guilty of being my favorite licensed games to provide some vague semblance of human pleasure if a machine scanned the internet for things people wished they could do if Star Wars was real.

Have you ever wished you could dance to bad parodies of pop music with Han Solo and Princess Leah? Do you wish you could swing a lightsaber without actually holding anything? Do you love Star Wars, but hate yourself? Star Wars Kinect is all of this and more, but barely more. It will live on in the annals of space history.

Episode One: Racer, on the other hand, focuses on a specific and important scene of the prequel movies and thrives to give the player the experience of a lifetime. Whipping across tracks fraught with life-threatening obstacles at high speeds and very little respect or recognition of what's actually happening around you. I understand we all have our own unique opinions of Anakin Skywalker. Hero. Father. Hater of sand. But damn could he race across those dusty tracks as a child, detonating into smoke and scraps over and over again with not even a single tear of empathy from the onlookers. Is podracing an allegory for Hell itself? Perhaps. But sometimes you come in first and that's impressive, even by Hell standards.

Rob Shaw
This is an easy question to answer because I really haven't played many Star Wars games. If I had ever played KotOR it might be my favorite, alas I have not. That's been one of those maybe-one-day games that I bought a long time ago and never installed in my Steam library.

The only Star Wars game I have any real memory of playing... and a very fond one... is Rogue Squadron on N64. It may be one of the least Star Wars-y Star Wars games out there... I don't know, but it was fun. Plus, I could be wrong, but I think that was the game that introduced me to the incredible sensory technology known as the Rumble Pak. I should buy that game on Steam and maybe-one-day play it again.

Cole Monroe
The only Star Wars game I really put a lot of time and energy into is not one that's look upon very fondly, but at the time I loved it and consumed everything I could surrounding that game. I even read the book. That game is Shadows of the Empire. With a paltry launch lineup (sound familiar?), Shadows of the Empire was a must own for any early N64 owner. Sure, Dash Rendar is a shitty Han Solo, and the controls sucked outside of the Hoth re-creation but I 100%'d that game because I had to. The fight with Boba Fett. The dog fighting on rails. It was all so terrible. And I loved it.

I barely got into KOTOR as my original XBOX was mostly a Burnout machine. Dabbled here and there with other games but missed the great ones on PC because I wasn't a PC player in the early days. My Star Wars video game oeuvre is paltry by comparison.

Ryan Billingsley
There are a lot of Star Wars games I enjoy, but if I had to pick a favorite it would be Knights of the Old Republic. The story was great, it had that BioWare touch when it came to conversations, but most importantly it had a great light side/dark side mechanic that I loved. It became a quest to drive my character to the extremes of whichever play though I was on.

My guilty pleasure is definitely The Force Unleashed 1 and 2. They aren't great, the story is pointless, but the sheer joy of charging up a force push and sending stormtroopers plummeting to their death is worth suffering through all of it. A close second would be Jedi Outcast, the second of the Jedi Knight games, which was a successor to the Dark Forces series. It was always fun to run around as Kyle and swing that lightsaber every which way.

JB Buckner
I played Force Unleashed forever ago and it would be my pick for both questions. I liked being an overpowered dark force user. Force Push and Lightning that blows everyone away ... including Darth Vader. When you had them powered up enough that you felt invincible that game got really fun. I enjoyed that game's dumb fun and wondered at the time how the hell they rationalized the plot line being canon. But now I say who cares! Bring me all the fights with the bad guys so I can show off those bad ass powers!

Justin Gifford
This is an agonizing question to answer, because both Jedi Outcast and Knights of the Old Republic II are so good. Based solely on playthroughs, it's Jedi Outcast, but the deeper skill tree and one of the real tentpoles for the emergence of the ARPG/WRPG as well as my first experience with morality and relationships in a video game probably gives KOTOR II the edge.

I'm not sure I feel guilty about many Star Wars games that I've played. I mean, sure, all of the Battlefront games are continuations on Battlefield II, but I can be a cog in the machine in a Rebel/Empire battle and smoke some dudes with an X -Wing (that mechanic in Battlefront II was really cool, btw). Force Unleashed had a nonsensical story, but the force powers were magnitudes more fun to use than in any other Star Wars game, and every single one of the X-Wing/Tie Fighter games suffered from weak stories and controls that centered around slowing your loop-the-loop enough that you could get inside your enemy's turn radius or relying on your shields to allow you to go out, do an S-turn, and pull a head to head.

And yet...I don't feel guilty about a darned thing. It's not like I bought that stupid game for the Kinect.